Apple held their typical early September event yesterday, and as we’ve done in the past, we’ve got a recap here for you in case you were unable to catch the event live. So without further ado, here are the big announcements you missed. 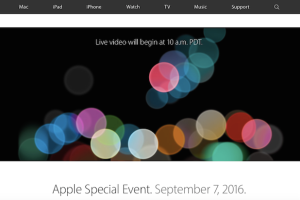 First thing to know, if you were hoping to see completely new, never-before-seen products, there’s a little of that, but overall not a lot has changed. Many of the updates are what you’d expect if you’ve been keeping up with Apple’s release cycle over the past couple of years, perhaps just a little toned down. That said, the updates that have been made are good improvements, and likely features building towards bigger and better things in the coming years. 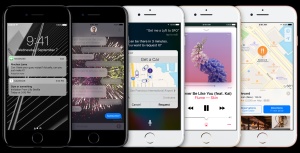 Say hello to the iPhone 7 and iPhone 7 Plus. Not a whole lot has changed to the actual design of the phone; it’s design is largely similar to its predecessors. Apple has added a sexy new high-gloss Jet Black color to the finish choices for the device as well (and a regular black). They’ve upgraded the processor, and revised the home button so that it will vibrate to give feedback depending on the force with which you press it. They’ve also turned up the power of the camera which is steadily becoming an impressive piece of tech all by itself, often acting as the go-to camera for most people in every day life. The Plus model will actually include a dual-lens camera, so if you want to take your amateur photography game from 0 to 100, this is a quick way to get that professional look. Pictures of Fido will never be the same.

You might also be pleased to know that Apple has finally made these phones water-resistant! So, should a pool party get a little rowdy and you get tossed in the drink fully dressed,  your phone should be fine (to be clear though, we aren’t endorsing making a habit of submerging your phone in water).

Apple has also adjusted the storage capacities for these devices. The starting capacity will be 32GB, and will skip 64 to move on to 128 and 256. The other good news is that the iPhone 6S will also start at 32GB going forward.

Perhaps most notably, Apple has removed the headphone jack from the design of the iPhone. Headphones will now connect to the phone via the lightening port – you know, the same one you plug your charging cable into. The iPhone 7 will come packaged with headphones as usual, but also  a lightening adapter so you can use any old pair of headphones with your phone as well.

Lightening audio not enough of a earth-shattering innovation for you? Apple’s got one more headphone adjustment if you’d rather not be tied to a wired solution. 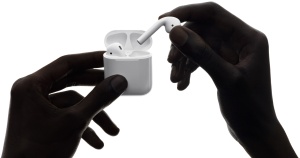 Wireless headphones are certainly not a new thing, but Apple is confident that they’ve improved on the Blutetooth technology being used to connect and power them with their new AirPods. They’re headphones and microphones. You can activate Siri from them. They’ll even stop playing your music once you take them out of your ears, and start again once you’ve put them back in. Choose the one device you want to connect your AirPods to,  and with one easy setup, all the rest of your devices will be connected as well. The AirPods will provide 5 hours of battery life on one charge, and as long as you have their neat little carrying case with you, you can pop them back in to provide more than 24 hours of battery life. So that’s a thing, and a check in the “something new” box.

Time for an update to the Apple Watch 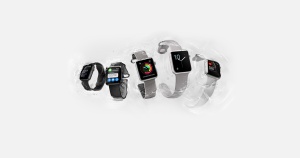 We’ve talked recently about our thoughts on the Apple Watch, and perhaps the Apple Watch Series 2 will address some of the criticisms we’ve mentioned. To be sure, the Apple Watch does quite a few things, but it doesn’t exactly excel in any one area. The Series 2 is looking to emphasize the fitness and health features more this go around, with additional features and capabilities that they’re hoping will put it more on par with a device like the Fitbit. One chief complaint we’ve discussed before is how tethered the original Apple Watch has to be to your phone. The device is pretty useless on a run if you leave your phone at home, as it doesn’t have its own built-in GPS. The Series 2 Watch will actually include GPS, so that’s one less thing you need to carry with you while training for a race. Like the new iPhone, the new Watch will also be water-resistant (up to a depth of 50 meters). There are also some new band options, and a Nike-style version of the watch  if you’re feeling super sporty.

Plumbers and Pokemon and Productivity – Oh my!

Good news for the video-game nerds in our midst – Nintendo has just jumped a little deeper into game development for mobile devices. Nintendo legend  Shigeru Miyamoto was on hand to announce that Super Mario will leap into action on the iPhone in an app called Super Mario Run. If you’re a Pokemon Go enthusiast (and we’re sure you’re already aware that the College of Medicine is a Pokestop), the popular app is coming to the Apple Watch as well. Aside from games, a new version of iWork was announced, so apps like Keynote and Pages will include real-time collaboration (much in the way the apps in Google Drive work, or Microsoft Office Online).

So there you have it as far as big announcements. It’s all right if you find yourself a little underwhelmed this time around. One thing to keep in mind is that believe it or not, the iPhone will be 10 years old next year, so perhaps Apple is waiting until then to really pull out all of the stops. That said, the new phone and watch will be available for pre-order starting September 9th, the AirPods for purchase in late October, Super Mario Run in December, and Pokemon Go for Apple Watch and updates to the iWork Suite have to be determined “soon” release dates. In the meantime, you can also look forward to iOS 10, which we previewed back in July. It will be available for your devices September 13th. Read all about that here.