Is Adobe Flash finally being put out to pasture?

You’re likely very familiar with Adobe Flash. Or at the very least, you’re used to seeing a window like this pop-up every once in a while as you browse the internet for cat videos and whatnot. 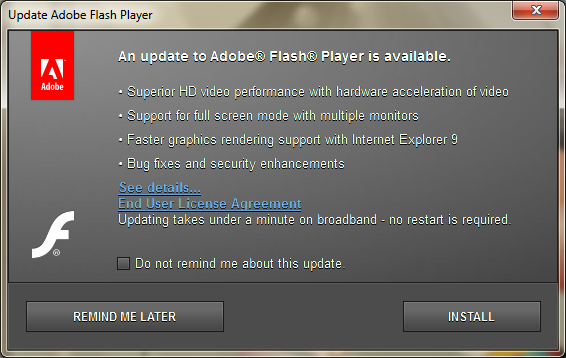 Admit it, you click the “Remind Me Later” button too, right?

Flash has been around for a while. Back in the 90’s as the internet was getting to be kind of a big deal, the software was acquired from a company called FutureWave Software by a graphics, multimedia and web development software company named Macromedia (that’s a throwback); it went from being named FutureSplash to being called Macromedia Flash. Adobe took over Flash in 2005 when it acquired Macromedia. Flash in all of its forms has been a platform for creating things like vector-based graphics and animations – it’s likely behind many of the mobile games on your smartphone or tablet! You may be more aware of how Flash is used to stream audio and video while on the web courtesy of the Adobe Flash Player.

In the 2000’s, it was easy to find Flash-based games, advertisements, and other interactive media all over the internet that required one to have Flash Player installed in order to make use of it. As we near 2016, it seems we’re even closer to a time when we may officially say good-bye to the platform.  For one thing, more and more websites are turning to HTML5 technology as the primary format for their applications. HTML5 includes a number of features  that are designed to make including and handling multimedia and graphical content on the web much easier, making an old-school plugin like Flash Player a little obsolete. Additionally, you may have noticed that interacting with Flash-based content on the web while using a mobile device is not exactly a thing (Adobe has been working to make Flash more HTML5 compatible, admittedly).  The platform has also had its share of security and vulnerability issues over the years.

So what does the future hold for Flash? For the moment, just a name change apparently. Adobe announced earlier this week that Animate CC (previously Flash Professional CC) will be “Adobe’s premier web animation tool for developing HTML5 content while continuing to support the creation of Flash content”. Adobe Animate CC will be out in early 2016, along  with a new HTML5 player for desktop browsers. While Adobe does seem to acknowledge that HTML5 will be the “web platform of the future across all devices”, the company doesn’t seem quite ready to put Flash to bed.

In the meantime, we’ll just make sure we continue to provide you with content you can view across all of your devices – we’d be doing our motto a disservice otherwise!